Ankle Injuries – When To Mobilise & When To Immobilise

You are presented with an ankle injury.

…what is the best way to manage it?

Beyond your standard inflammatory control, ice, compress, elevation etc, one big decision is you need to and how to protect the ankle.

Do you immobilise it using a compression or moon boot, or maybe use crutches?

How exactly do you decide which is the best course of action?

Some of the evidence suggests that you should be mobilising ankle injuries as soon as possible.

…this does NOT apply to all injuries and if you get this wrong it can cause BIG problems for your patient or athlete.

…to improve recovery times & avoid problems in the future, including unnecessary surgery.

Why You Need A Clear Diagnosis

There is a long head notion in medicine that the general advice is to load the ankle, as soon as able, assuming it isn’t broken.

You have no doubt heard of the OTTAWA ankle guidelines.

These are great for helping to justify imaging i.e. x-rays for possible fractures and as a general guide for early ankle management, but this guideline is predominately fracture based.

So, what is the best advice to follow if you have a non-bony injury, like a lateral ankle ligament injury?

…and as a result have had BIG problems in the future, including having to have surgery that could have easily been avoided.

He injured his ankle in a rugby game and went to A & E.

…the best thing to do is keep it moving and walk on it.

He was still limping around, unable to do any lower body gym work and was getting very frustrated.

I saw him in my private clinic and it was clear why he hadn’t settled.

He had a syndesmosis (high ankle) injury, not a lateral ankle injury.

He had spent the last 5 weeks walking around with an unstable ankle, every step he took, stressing his syndesmosis (distal fib-fib joint).

The fact he had been walking around and mobilising his ankle was the reason his symptoms had barely improved.

Had that injury of been managed differently at the start, what happened next might have been different.

We tried to get some stability back and I put him in a compression boot and on crutches to offload his ankle.

We weaned off the crutches over the next 2 weeks and in total he spent 4 weeks in the boot.

But, it didn’t work.

His symptoms did improve significantly, but not enough.

Unfortunately, the damage had already been done and he had an unstable ankle, and he needed to have surgery to get fixed up.

This is a great example as to why you need to identify clearly what structures are injured.

If you can not do this, then it makes your management of any injury difficult.

…this is not the case for a syndesmosis injury. 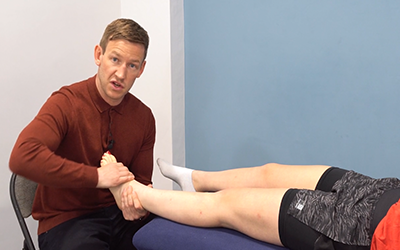 Get Your Anatomy & Special Testing On Point

One of the biggest give aways with the above injury was how he injured his ankle.

Unlike some people he was explicit with exactly how he injured his ankle.

He told me he was tackled from behind, a player landed on his lower leg with his toes point up and away from his body.

…his foot was in a dorsiflexed position with his foot in external rotation.

The exact position and mechanism for a syndesmosis injury and very different to the usual inversion or rolling of the ankle.

You could have ruled out a lateral ankle injury just on his subjective history.

But even then we can use the objective assessment to confirm what was going on.

Palpation is very useful with ankle injuries, due to the fact that ALL the main ligaments are superficial structures.

You can palpate the ATFL, CFL, syndesmosis ligaments and even the deltoid ligament.

Assuming you know your anatomy!!!

Special testing of the ankle is also very useful.

The anterior draw and the plantar-flexion/inversion tests for lateral ankle injuries, namely the ATFL and CFL…

…and the tests for the syndesmosis, like the squeeze test or the dorsiflexion/eversion test, have relatively high sensitivity and specificity.

If you know what injury to suspect (good subjective history) you can select the right special test.

If you understand what each ankle special test is testing and can complete the test well then you will be able to differentiate between different types of ankle injury, like a lateral ankle ligament injury or a syndesmosis injury.

Be Overzealous At The Start

Regardless of what structure is injured in the ankle it makes logical sense (to me any how) that if someone is struggling to walk we should aim to help them.

Surely if they are in pain and their gait is very poor shouldn’t we aim to try and reduce this pain and allow them to function better?

Any easy way to do this might be to use a compression boot or even crutches, maybe both if the injury is severe enough.

But what about the research and the benefits of mobilising lateral ankle injuries?

What if they do not need to be immobilised?

Clearly if you have a very minor ankle injury, where gait remains good and they have minimal pain then there is good reason they shouldn’t be immobilised.

But if putting them in a boot or on crutches improves their symptoms, even if just in the short term, then why would you not consider using these methods?

Being ‘overzealous’ and putting a patient or athlete in a boot or on crutches with an injury that isn’t too bad, the worst thing that might happen is their ankle gets a bit stiff.

The danger of not immobilising however, might be that their injury gets worse.

They leave your care without a boot or crutches then the next morning it feels much worse.

What do they do now?

They do not have much choice…

…as they will be stuck at home without likely access to a boot or crutches and they have no other option than to mobilise it.

Acute injuries can also be difficult to assess straight away.

When an injury has recently happened, largely because of inflammation, it can be difficult to attain exactly what structure or structures are injured, because ‘everything hurts.’

In this case, there is good argument to protect the ankle until things settle.

Stick them in a boot or on crutches, protect the area and then review them again when things have settled a little.

This makes it much easier for you to assess, and as a result you are much less likely to pick up any red herring symptoms and you will then be able to advise and manage your patient or athlete in the best possible way.

Why You Need A Clear Diagnosis: If you do not know what structure or structures are injured then it makes your job of managing that injury much more difficult.

Get Your Anatomy & Special Testing On Point: Your palpation skills and special testing are key components of any ankle assessment, but to do these well you need to know your anatomy (palpation) and know your special tests and be able to do these tests well.

Be Overzealous At The Start: Look after the ankle when it is first injured, let things settle in a boot and use crutches as needed, then you can assess the injury better and ensure you get the right diagnosis, so you can manage your patients ankle in the best possible way.

>>> Do you want to learn more about ankle injury assessments and management?

Email me at andy@newgradphysio.com with the subject ‘Ankle’ and I’ll get right back to you and help you out.

There is much more to a great ankle injury management and I’d love to share this with you so get in touch!