Are You Missing These 3 Vital Yellow Flag Questions?

I had a big eye opener when a rugby player I was working with told me he had depression.

We were 4 months in to a 9 month rehab programme and he had been struggling for the last 3 months.

I had no idea.

He had depression and I didn’t know.

Some days he looked a little down but that was to be expected and most players don’t enjoy being injured and missing training and games.

But this would usually be short lived and he would brighten up and we would get stuck into his rehab.

His physical rehab was going well.

He had a complex shoulder problem following a dislocation as he sustained during a game, resulting in a big nerve injury.

Whilst he had successful surgery to fix his shoulder (labrum and glenohumeral ligaments) the nerve injury he sustained at the same time, meant a much longer rehab period.

What would have been a 12 week injury, from his surgery to a return to rugby matches was 9 months, because of the nerve injury.

This was a big factor in the development of his diagnosed depression.

We were on track and we were making positive progress with his recovery.

Or so I thought!

I was totally unaware of what was going on in his head.

And even after he told me, I didn’t feel like I had the skills or confidence to know how to help him.

The club doctor at the time was great and his input was invaluable in helping this player with his depression.

We also sought additional support from mental health professionals outside of the club.

This players story turns into a good one.

He used his own mental health struggles as motivation to help others.

A year after his own battle with depression he founded an organisation which now helps other men with their own mental health issues.

But as a health progressional I was meant to help him.

I felt at the time I had let him down.

I didn’t have the knowledge or skills to help.

There’s nothing worse than feeling like you can NOT help your patient.

My University training had left me underprepared for this.

This event led to me spending a whole lot of time researching and learning about mental health.

I needed to learn more and understand how to identify these types of isuses.

And learn how these issues were affecting the results I was trying to achieve with the athletes and patients I worked with.

Knowing what I know now has greatly helped me in my day-day practice by helping me really understand what questions to ask my patient and athletes to identify and deal with any yellow flag issues.

It’s about identifying possible barriers that may affect your treatment plan and stop you and your patient getting the end result you are trying to achieve.

In this blog I will share 3 Vital Yellow Flag Questions that I now ask with every single patient and athlete that I work with.

Problems that if left unaddressed can derail your treatment plan and patient progress..

I’ll explain what they mean and how you can use them to tackle yellow flag issues, all in the very first session.

#1 What Do You Think Is Causing Your Problem?

This is a direct question to your patient.

‘A muscle, ligament or tendon problem’

‘A trapped nerve’ or

The aim of this question is to determine your patients current beliefs about what they think is going on.

One of two things will happen.

What they think is causing their problem is actually right.

But, this doesn’t happen that often.

They might have been misinformed by another therapist or GP.

They might have mis-diagnosed themselves using the help of the internet and Dr. Google (very common!).

Once you have identified any mismatches in what the patient thinks is the problem and the actual problem then you need to address this.

Addressing these misconceptions early is key.

It helps to dampen down any fears that they might have thinking something more serious is going on i.e. something sinister.

And not worry or waste energy on other issues that your patient might incorrectly think are causing their problem.

You might think that all patients want and think they will get better, but many don’t.

For those that don’t, it is largely the result of one of two reasons (sometimes both).

1: Failed rehab in the past or
2: Because of information they have been told previously.

Because they failed in the past and their knee or lower back or shoulder injury still gives them some problems now, even after treatment and rehab, they think that this injury will be no different.

Additionally, they may have previously been told by another therapist or GP or another practitioner that they have a problem that can’t be fixed.

These are those patients that tell you things like, I been told I have..

’Wear and tear’ or

‘That my problem is only going to get worse.’

Patients with these beliefs are harder to rehab.

Not only do you have their physical injury to deal with you have to work harder to get them on board with your treatment plan and to keep them on track.

You need to make every effort to educate your patient about what their actual problem is and make it clear to them if a full resolution of symptoms is possible or not.

This is individual to each patient.

9/10 patients will make a full recovery.

Deal with any misconceptions and incorrect beliefs your patient might have as early as possible.

Tell them their problem and how you intend to fix it (your treatment plan) so everyone (you and your patient) are on the same page, right from the start. 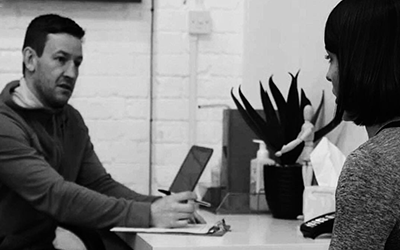 #3 What Do You Think Could Stop You Overcoming This Problem & Making A Full Recovery?

This question is aimed to identify any possible barriers to a successful patient recovery as early as possible.

During the week, around commuting to work, work itself, looking after the kids etc a patient might only have 5 minutes during the day to do their rehab.

It’s all well and good designing the best rehab plan ever seen for their shoulder or achilles pain but if they don’t have the time to do it then its a complete waste of time.

Clearly this doesn’t match up.

And what actually happens is even worse.

Rather than doing 5 minutes of your 15 min rehab session patients don’t even do that.

They feel like they are failing and as they can’t find the time to do the rehab properly, so they don’t so any at all.

Alongside time, access to equipment or space or just forgetting to do their rehab are all other barriers that may stop you getting great patient results.

But unless you ask these questions and find out what barriers might stop your patient doing their rehab and making progress then you would never know.

Your treatment plan needs to account for these challenges.

It needs to remove any possible barriers to a successful treatment plan.

When any patient has apprehensions or skepticism about being able to recover fully, you should aim for small ‘wins’ as soon as you can.

That might be trying to improve ROM of their shoulder, or reduce their knee pain or improve their squat in that first session.

If patient does have yellow flags, making improvements, however small, as early as possible, is key.

This will help you show them they can improve…

Get them on board with your treatment plan…

Adhere to their home exercise programme…

And make their first steps towards a successful return to their goals, whether that is returning to work, the gym, running, pro sport or whatever is it they came to see you for in the first place.

What Do You Think Is Causing Your Pain? Dampen down any fears your patient may have regarding a sinister pathology and educate your patient regarding their actual problem, if their perceived problem is incorrect.

Do You Think You Will Make A Full Recovery From This Injury Or Do You Think You Might Just Have To Live With It? Poor previous rehab or an incorrect prognosis can leave patients fearing they won’t improve. This is a major barrier and if left untreated can result in poor patient confidence and adherence to your treatment plan.

What Do You Think Could Stop You Overcoming This Problem & Making A Full Recovery? Identify any possible barriers to a successful patient outcome early then design your rehab programme so it takes account of these possible issues.

PS. This is NOT an exhaustive list of yellow flag questions.

There are another couple of key yellow flag questions that you can should be asking with every patient you see, to ensure you don’t miss any important information so you can plan the right rehab.

If you’d like to learn what these are, just let me know.

Email me at andy@newgradphysio.com with the subject ‘Yellow Flags’ and I’ll get right back to you.