How To ‘Prevent’ Hamstring Injuries

Hamstring injury incidence has barely changed over the last 30 years despite the efforts to prevent these types of injuries.

Big budgets have been spent researching hamstring injury prevention, but despite these efforts and great costs involved, hamstring injuries are just as common as ever.

In sport these injuries account for large amounts of time lost to training and competition with re-injury rates extremely high.

Hamstring injuries are not just limited to sport, they are frequent within private practice and even the NHS with more active individuals.

Even if you don’t see that many hamstring injuries, the concepts we will cover in the blog post are transferrable to other overuse injuries like Achilles tendinopathy, groin pain and patella tendinopathy.

To cut a long story short and save you reading my 12,000-word dissertation the summary was…

So much research has attempted to understand how we might be able to reduce injury incidence of hamstring injury but given the stagnant injury incidence data, these attempts have been unsuccessful.

We know the common risk factors for most injuries and can relate correlations i.e. factors that might contribute towards injury but what we do not know is direct causation i.e. exactly WHY these injuries happen.

Usually you get no warning signs with something like a hamstring tear, hence why they often look dramatic, like when a player pulls up whilst sprinting down the field, clutching his posterior thigh, before being helped from the field. 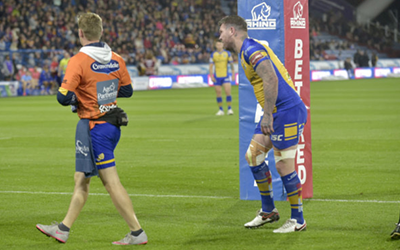 If there is any evidence to support the use of injury ‘prevention’ it points to the gym.
The research shows that those programmes that (may) help reduce possible hamstring injury incidence are those that include strength training as part of their content.
Exercises like RDL’s, hamstring bridges, eccentric exercises like Nordic’s are examples of commonly used exercises to train the hamstring muscle group.
Strength training and the resulting affects of the training will build capacity in a muscle group and therefore it makes sense to suggest that this type of training will make athletes and patients better prepared for activity and in turn more resilient to injury.

But it is NEVER just about strength.

If it was, the most robust athletes and patients would just be those that are the strongest.

Why is it then, that ‘strong’ athletes and patients still get injured?

Sometimes even more so than their ‘weaker’ counterparts.

I have seen powerlifters and strongmen that can hit 350kg + on some of their lower body lifts yet can’t do a glute bridge properly on the treatment table and get injured at the same rate (if not more) than other athletic populations.

Strength is important but it is NOT the holy grail to injury prevention as some practitioners (medical and strength and conditioning) might suggest.

For running based athletes and patients, exposing them to the loads and the right intensity and frequency of running is paramount.

Going back a few years I had rehabilitated a professional rugby player successfully back from a high-grade hamstring tear.

During his end stage rehab, he hit the fastest speeds, repeatedly, than he ever had done before in training and even games (we used GPS units to measure).

He made a successful return to training and games, however, 6 weeks later he broke down, this time with a hamstring injury to the other leg.

Having looked back over his training and matchday data we noticed something interesting.

Since his return to ‘full’ training he had hit nowhere near the top speeds and frequency of top speeds that he had during those final stages of his rehab.

The closest he got that top speed was 85%.

When he was asked to go faster, he broke down.

His speed when his second injury occurred was in a game when he was sprinting at 90% of his top speed.

When he was asked to go fast, he did…

…but because he hadn’t been exposed to that speed of running over the last 6 weeks, his body could not tolerate it and he got injured.

Knowing that information, was it a surprise he got injured?

If you don’t expose your athletes and patients to the loads that they are likely to experience during activity; the gym, 5 km park run or even high level sport, then we are doing them a disservice as we are not preparing their bodies in the right way.

Whilst this blog is related to the hamstring, this concept of ‘underloading’ patients relates to the management of ANY other type of injury.

With regards to hamstring injuries specifically, it is paramount that we expose athletes and patients to high speed running if that is something they need to do to return to their chosen activity or sport.

We also need to make this realistic and ensure they can run fast not only repeatedly, but also under fatigue and match the demands of the activity or sport they are returning to.

Running fast (and often) exposes the hamstrings to high loads, like those experienced during running and sport and therefore MUST be included as part of any athletes/patients rehab from a hamstring injury or as a measure to reduce hamstring injury incidence in the first place

PS. In case you missed it, I recently launched a new FREE resource ‘5 Steps To Fast-Track Your Career As A New Grad Physio.’

This is my most popular downloaded resource to date and in it you will discover the specific steps you need to know to accelerate your clinical and non-clinical skill-set development to fly up the promotion ladder faster than anyone thought possible.