The knee itself is a relatively simple joint.

It’s a hinge joint, it flexes and extends (it also internally and externally rotates) but lets’ keep it simple.

The strong muscles of the quads, hamstrings and calves support the knee alongside the passive structures like the ligaments and menisci.

A simple as knee might appear, some patients with knee pain can be tricky to deal with.

…maybe they went back to running and their symptoms came back…

Despite being a ‘simple’ joint the knee can be challenging.

This blog will help you better understand what makes a great knee assessment and how you can identify what special tests you should use, the order of special testing and why the ‘best’ evidenced tests might NOT be the best tests to use.

Unlike some other areas of the body i.e. the shoulder, the special tests of the knee generally have good sensitivity and specificity, meaning it should be easier for you to identify exactly what structure is causing your patients knee pain.

However, this is making a big assumption that you can do the tests well.

Any special test, regardless of how good it looks in a journal article or textbook, regardless of the high sensitivity and specificity score, it is only as good as the person conducting the test.

More important than that is the fact that you know which test to use with the right patient.

When presented with knee pain you should NOT test everything.

For many of us, maybe you, this was the approach we were taught at University, but there is a big problem with this approach (more on this below).

You need to be as specific as possible when using your special testing to ensure you don’t pick up any false positives or miss an important injury like a meniscal injury or even an ACL.

The only way to do this is to complete a good subjective history so you have a good suspicion about what structure or structures may be injured, so you can prioritise certain tests during your objective assessment to test these suspicions.

Then you need to test…

…but whilst you might suspect a certain injury, if you do NOT know what test to use to test a suspected ACL, PCL, MCL, LCL or posterior lateral corner injury then you won’t be able to rule in or rule out these injuries. 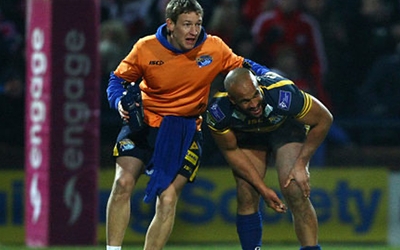 Do Your Tests In The Right Order

When you get to the part of the objective assessment when you use your special tests, it is highly important that you order the tests in the right way.

Two main factors should influence the ordering of your special testing.

Firstly, you should pick the most relevant test or tests for the suspected injury you think your patient has.

For example, if you suspect an MCL injury, you would conduct a MCL or values stress test.

But many therapists don’t do this, they just fall into the trap of conducting all the knee tests they know, in the order they were taught at University or the order they have used before, regardless of the patient and suspected injury on the bed.

I did the same as a New Grad.

You do, as I did, as you were taught.

And I kept doing the same until I was taught otherwise.

Secondly, where possible if you suspect that you may need to test more than one structure and might use multiple special tests with a patient, you should always try to test the least provocative tests first.

The big danger of not doing this, is that you irritate your patients’ knee unnecessarily, which may then complicate the remainder of your assessment.

Say for example, you suspected an MCL injury, but instead of using a valgus stress test first, you wanted to rule out a meniscal injury.

That might make sense, the mechanism of injury could be similar and both would present with symptoms to the medial side of the knee.

You choose to use a McMurrays test to test the medial meniscus and it brings on some medial knee pain, but there is no clear clicking or any other signs that you think might indicate a clear cut meniscal injury.

Then you move on to test the MCL.

But, at this point the knee is already painful.

…or is just residual pain from the previous McMurray’s test.

Additionally, because your patient is in pain they might try and guard that area and be unable to relax their knee, which makes special testing a ligament like an MCL impossible.

Whatever your primary hypothesis of injury is…

If you think you may have to test multiple structures in the knee, think about what order you are going to test as this will have a big impact on your testing results.

Find What Tests Work For You

Just because one test has better sensitivity and specificity scores does not necessarily mean it is the best test to use.

The majority of the literature you read regarding ACL testing indicates that the Lachman’s test is the ‘best’ test to use to rule in or out an ACL injury.

Whilst this may be true, as the textbooks and journal articles prove, it is not a test I favour because it doesn’t work for me.

Probably not too surprising.

Since qualifying and for over the last 10 years I have worked in pro rugby.

For a large majority of players I found that trying to grip my hands around their proximal calf with one hand, to get in position to do a Lachman’s test, tough.

Players generally are pretty muscular and have bigger calves than you or I and whilst I don’t have small hands by any means, I found using another ACL test, the Anterior Draw Test, much easier.

So I generally used that instead, as my primary ACL instability test.

I found it much easier and got a better ‘test’ using the Anterior Draw Test versus the Lachman’s test and having used that test much more over the years, it is now my ACL test of choice.

We should always be guided by the evidence for sure, but you also need to practice and know different special tests, as you may need to use different tests with different patients (and athletes) that you work with.

Know Your Tests: You can’t ‘test’ a structure if you don’t know the right tests and which special test is going to be the right one to rule in or rule out your patients suspected knee injury

Do Your Tests In The Right Order: Pick your primary hypothesis and test that structure first. After that try to choose tests that are less provocative so you reduce the chances of you irritating your patients knee and risk picking up a false test result.

Find A Test That Works For You: You should always be guided by the evidence but by practicing various tests you may find your have a better technique in some tests versus some others. If that is true this test might be a better option for you to use.

PS. Want to know more about how to better assess the knee and be able to give the right treatment techniques and rehab exercises to your patients with injuries like patella tendinopathy, patella-femoral joint pain or even injuries like an ACL, PCL or MCL?

If so, I have some content that will really help you out.

Email me at andy@newgradphysio.com and I’ll get right back to you.