Safe Squatting – Should The Knees Go Past The Toes?

What do you think?

The jury is out on the best way to squat.

…should you let the knees come over the toes?

There is a long help belief that letting your knees come over your toes is generally bad for your knees.

But is this true?

And what does the evidence say?

I was asked this very question just this week by a patient in my private practice.

He had got it wrong in how he was programming his lower body lifts, mainly his squats, that had led to a patella tendon flare up, that had stopped him being able to run and lift properly in the gym.

…so you can clinically reason when you might (or might not) use different knee positions with your squat based rehab exercises.

Knees Over Toes – Good Or Bad?

There is definitely a mix of opinion.

…whilst others will do the opposite and routinely programme knees over the toes lower body exercises like squats and lunges.

So, who is right?

It is well evidence that the joint forces going through the knee change as the knee passes over the toes.

Knee torque increases and this is the main reason that many therapists and trainers avoid this movement.

However, we load the knee in this position everyday.

The knee comes over the toes coming down the stairs, or when walking down a steep hill or when squatting down to pick something off the floor. 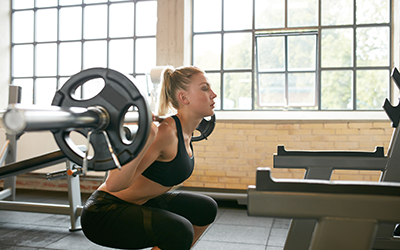 So, is it a good thing or a bad thing?

For the patient I saw this week it was bad.

This young rugby player was a patient I had seen throughout his ACL rehab following surgery late last year.

His rehab had gone great and had been back running for the last couple of months.

I had not seen him for a little while due to lockdown here in the UK and during which time he had started doing some additional gym based work 1-1 with a strength coach.

This coach liked to programme knees over the toe exercises.

He’d been doing plenty of end range strength with exercises like decline lunges and squats and other exercises with the knees over the toes.

This had been going great until he developed some patella tendon symptoms.

This initially started affecting his gym work and later started to affect his running, to the point that he had to stop two weeks ago.

During his ACL rehab we had done loads of hamstring work but when I assessed him in the clinic, he wasn’t loading his hamstrings and glutes well when he was squatting and lunging.

His hamstrings and glutes weren’t doing enough and something else was taking up the slack and doing more work – his quad!

And where does that quad insert…

…you guessed it > his patella tendon.

So no wonder this tendon was a little angry as it was doing its own job (the quad) plus someone else’s job (the hamstrings and the glutes).

Was this all the result of his knees over the toes rehab?

As with any insidious onset injury they are multifactorial.

But, his knees over the toes training was likely a big contributor.

My patient is a rugby player and to allow a safe and successful return to the sport he needs the ability to be able to load his knee in all types of positions.

His knee and body is NOT always going to be in ‘perfect’ alignment when he is playing, making tackles or trying to evade an opponent.

And this is one of the big problems and talking points…

…are we actually predisposing our patients and athletes to re-injury?

Is this why we see such a high proportion of knee re-injuries like ACLs?

The Context Is KING

However, how he did this was very different to what he had been doing previously with his strength coach.

In the gym he was loading these positions at end range with added resistance i.e. dumbbells/barbells.

In his rehab with me I started by getting him to move slowly in and out of a split lunge position using only his bodyweight.

I wanted to reassure his knee that it was ‘safe to load’ that position because he had some pain and apprehension to load his front knee during a lunge.

I wanted to get rid of this ASAP because I know he needs to be able to load in this position in everyday life i.e. stairs and he will also need to load his knee in a similar position if we want to get him back running.

To progress this exercise I’ll make it quicker, alter foot or knee position or add upper body movement i.e. add a twist to replicate what the body will have to do when running.

But I wouldn’t add external load to a knees over the toes position.

In the same way, I wouldn’t be cueing to land in excessive knee vagus when hopping or landing from a height e.g. depth jump.

I have found giving exposure to patients and athletes to certain knee positions, often considered vulnerable i.e. fixed foot, valgus and internal rotation, under controlled conditions prepares the body for the those positions in real life.

I’ll use warm up drills or prehab exercises to ensure that the patients and athletes I work get some knees over the toes exposure so they are ready when they need it.

Do you want the first time an athlete goes into a ‘vulnerable’ position to be in a warm up drill (slow and controlled) or during a training session or game (fast and chaotic)?

We want any patient or athlete, to have experienced and learned to control that movement and position, hundreds of times before they need to do it in ‘match’ conditions.

By doing this, we cover all bases and give exposure to loads and positions a patient or athlete needs, without running the risk of overloading certain patterns i.e. loaded knee over the toes lunge…

…or avoiding altogether certain positions i.e. a valgus and internally rotated knee with a fixed foot that a patient or athlete will get into in sport and other activities, which might increase their chances of getting injured.

Whether squatting or lunging one of the biggest movement competencies I want to develop is the hips moving before the knees.

Do this yourself and feel the difference…

In a standing position squat down.

Now try this again, but now allow the knees to bend first then the hips to follow.

If the knees move first all your momentum and weight shifts forward.

You will load the quads more, which increases the load to the front of the knee – the most common site of knee pain.

This is what my patient was doing.

This is very different to the first version – the hip first squat, when the posterior muscles of the thigh (hamstrings) and the hip (glutes) are able to contribute to the movement and action much more.

In this example the work is shared out and as a result, the quads have to do less total work.

How the knees work with the hips and the rest of the body is greatly important.

We need to make sure that when we are prescribing any knee rehab that joints are doing what we want them to do and that the work is shared out between muscle groups..

…and others are not overworking to take up the slack.

If we do this we will go a fair way in helping to prevent overuse type injuries and problems at the knee like quad and patella tendinopathies, fat pad impingement and patella femoral pain.

These structures become irritated because they are doing too much.

Too much of one thing is often not the best and can be a one-way ticket to injury.

So is knee over the toes rehab good or bad?

It can be both, if you prescribe it the right or wrong way.

Knees Over Toes: Good Or Bad? Knee load (torque) is increased when the knees pass over the toes but we load this position in everyday life and as such, it is a position we need to be able to do.

The Context Is KING Loading to end range with external load might lead to injury if used excessively, so a better way might be to load this knees over the toes position using unweighted or bodyweight movements.

Hips First, Knees Second We want all the muscles in the lower leg to work together during movement and ensure the ‘work’ is shared out as evenly as possible, so to look after the knees, make sure the hips are helping out.

PS. Do you want to learn more about the knee and lower body rehab?

Do you want to learn more about how to link your assessments and special testing to your treatment and rehab you prescribe for patients with knee pain?

Email me at andy@newgradphysio.com with the subject ‘Knee’ and I’ll get right back to you and help you out.

I’ve got something special for the first 10 people that get I touch.