Two seasons ago a player posteriorly dislocated his shoulder during a game.
But not just any game.

It was a semi-final and whilst the team won the game and as a result progressed to the Grand Final a week later, this player’s season was surely over?

Despite complications re-locating his shoulder, the structures that were damaged and the subsequent challenge to get him ‘fit’ in such a short space of time, he walked onto the field 7 days later, played 80 minutes and was part of the team that won the Super League Grand Final.

As a disclaimer, I am not sharing this case to impress you.

But I am sharing this story to impress upon you the importance of having a plan with any patient or athlete you work with.

This is an extreme example of how a good plan, well executed, can result in a great clinical outcome.

And don’t worry of you don’t work in sport or see acute injuries regularly in your clinic.

All the principles covered in this blog are relatable to any injury, not just extreme cases, and will help you to get better treatment outcomes with any patient or athlete that you work with.

Trying To Relocate A Dislocated Shoulder…

10 minutes to go in the game and one of my players is carrying the ball, he is tackled, falls to the floor, his arm is trapped under and across his chest (horizontal adduction), with two opposing players on top of him.

He doesn’t get up…

I enter the field and as I get there the player is clutching his shoulder and indicated that it feels like it is ‘out.’

And he was right…

I could feel a posteriorly positioned shoulder, his humeral head having come out of the back of the joint. 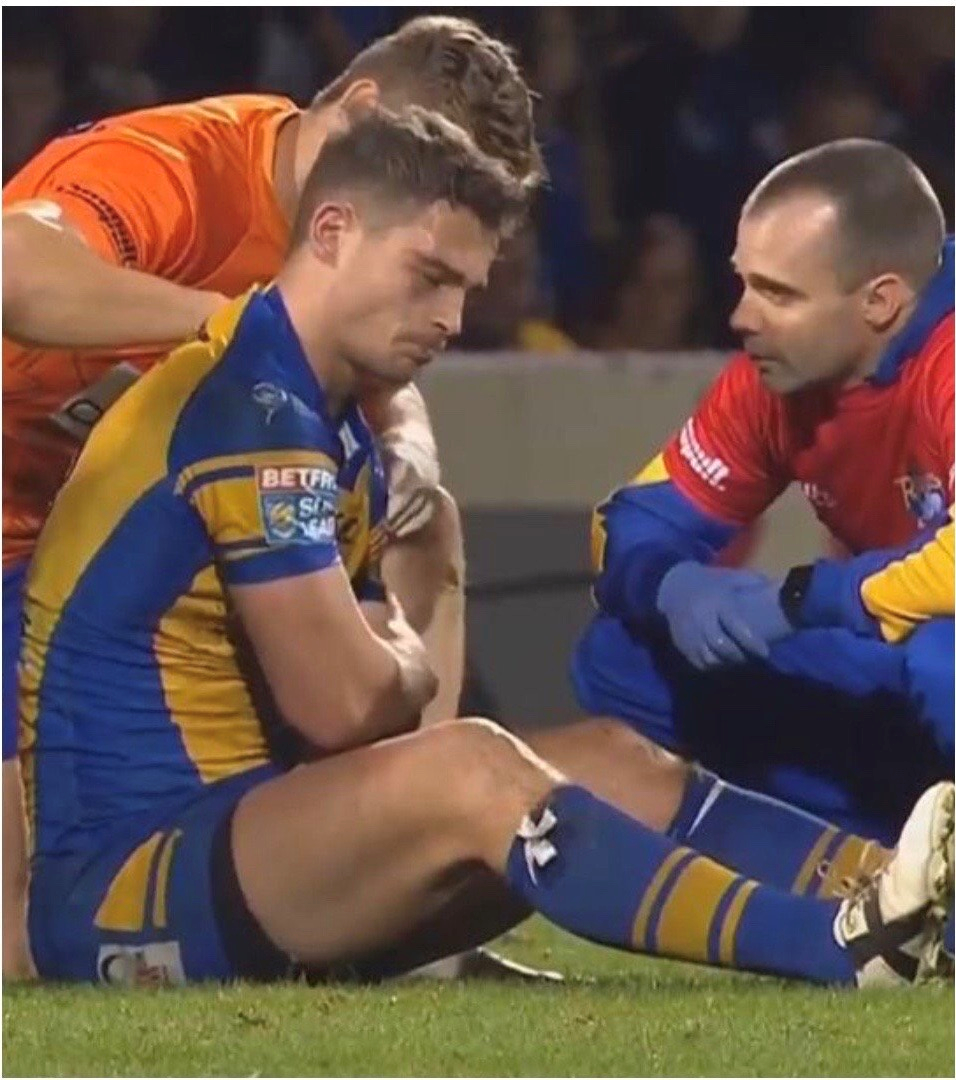 It was clear that the player wasn’t going to be staying on the pitch, so we helped him up to standing and walked him from the pitch.

Our match-day trauma plan meant I stayed pitch-side as the game continued and the team doctor took the player to the medical room.

Despite attempts to relocate the players shoulder using a variety of different techniques and the use of pain relief including Entonox, the medical team were unable to relocate his shoulder.

This can be common, particularly when players have had previously shoulder surgery, which included this player.

Often surgeons will repair and tighten the capsule around the shoulder joint during surgery and it is this that often makes it difficult to relocate a previously operated shoulder back into place following dislocation.

Add to this the protective muscle spasm and guarding that is commonly evident, it makes re-location very difficult and this case was no different.

The player was therefore transferred to hospital, where they too were unable to relocate his shoulder, even after further Entonox and powerful pain relief medication.

By this point it was the early hours of Saturday morning and the players shoulder was still posteriorly dislocated and now 5 hours had elapsed since the injury had happened.

Because attempts to relocate had been unsuccessful the decision was made to take the player through to theatre where-by he was put under a general anaesthetic to put his shoulder back in place.

This was successful and so after 12 hours his shoulder was now back where it should be.

‘Andy, I Want To Play Next Week’

Having been discharged from hospital under the guidance of our medical team the player was now back home.

Despite being in considerable pain and his arm in a sling I spoke to the player on Sunday, two days after the injury and the first thing he said to me was…

At this point we were 6 days out from the Grand Final and given his injury clearly this was highly unlikely.

I was due to review him the next day at the training ground, so I gave him his appointment time.

I had over the weekend organised an MRI and consultant appointment for the next day, which would follow his physio review.

He came through Monday morning and clinically he tested well.

He had almost full range of movement into flexion and abduction and good output on resisted testing in all positions.

We got to work desensitising his pain on the bed using hands-on treatment and then went through some low load rehab exercises in the gym.

I spoke open and honestly about his injury and the probable other structures he had injured having dislocated his shoulder.

‘Do you think I can play this weekend?’

I highlighted the severity of his injury, possible risks of further injury if he did play but…

Having completed his rehab session, he was off to get an MRI then straight over to see the shoulder consultant for review.

On the way to this appointment it was made clear, even if the consultant painted a poor picture and immediate prognosis, we would still continue with the plan, assuming the player still wanted to.

I suggested to the player that the consultant may indicate that he shouldn’t even attempt to play given his severity of injury.

However, he was very diplomatic.

Understanding the importance of the upcoming final and given his clinical function, he agreed the plan we had put together was robust and would give the player the best chance of playing in just 5 days-time.

He also agreed that the plan would allow us the progressively load the player in a way, that towards the end of the treatment plan it would be clear if the player would be in any way ready to put on his boots and take to the field at Old Trafford in the Grand Final.

The next day we were back on the treatment table working to restore his range of movement and output and then back in the gym, progressing his rehab, increasing the difficulty and intensity of exercise.

He also completed a bike session, led by the strength and conditioning team as a conditioning alternative to the field training session that he would miss.

He continued to improve and the next day (Wednesday) we again advanced his gym-based rehab.

We also went out on the field and ran, whilst starting to incorporate some controlled ball handling and passing drills.

On the Thursday it was a player’s day off, with no training scheduled.

Within a sports environment, any players requiring treatment do however come into the training ground to see the physiotherapists.

This was decision day…

Having clarified with the Head Coach earlier in the week, he needed a decision today regarding the players availability for the game.

This was for a couple of reason;
1: The coach must name a squad 48 hours before each game
2: He wanted to announce his starting team to the squad first thing the following morning at training, so he needed to know today whether he was in or out

As part of the session we were out on the field and took the player through a series of contact drills to assess his function.

Whilst at this point in the week we had restored his range of movement and output, he was back in the gym lifting well and with pain under control, he was progressing well, but he had yet to do any contact work.

Obviously playing rugby requires contact and his ability to (or not) tolerate contact was a big part of the decision-making process as to whether he would be declared ‘fit’ or not.

Over the course of this session he was tested in a variety of drills that became more difficult as the session progressed.

Prior to the session we had discussed the content and I had asked the player directly if there was anything specific that he would like to include.

He had a couple of ideas and these were incorporated into the session.

This is highly important in this type of context, but also for any player or patient returning to their chosen activity.

We progressively load patients and athletes during a treatment plan to ensure they are physically ready to return to their desired activity but it is just as important that they feel psychological ready to return.

Allowing input into end stage rehab planning with your patient or athlete is an easy, but a great way to do this.

Back to the session…

We made the call that day that he would be ‘fit’ to play.

We reiterated the risks associated with playing, but given the robust and thorough progressive rehab plan the player had completed, we were all (player, medical staff and Head Coach) happy to declare him available for selection.

And the rest is history…
He trained the day after and then on the Saturday he started and played the full game, a game the team won to be crowned Super League Champions. 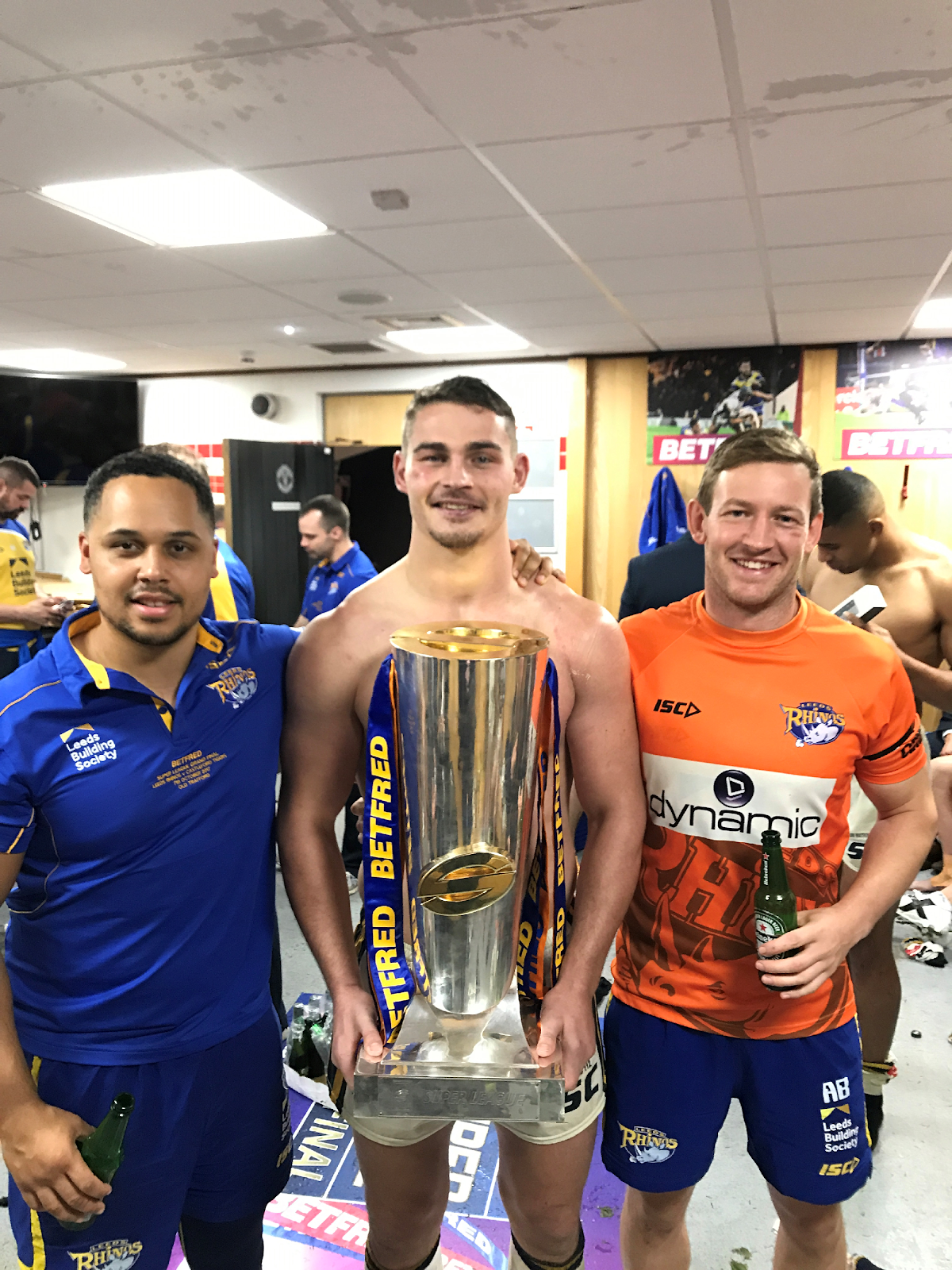 This clearly was a great outcome given the circumstances, particularly in relation to the severity of injury and the short amount of time we had available.

But we gave ourselves the best chance for success because we had a plan.

The game-day itself even had a plan.

We had discussed the timings of when he would get treatment at the hotel before leaving for the game, what treatment he would get at the ground and what rehab exercises he would complete and we had even practiced strapping his shoulder several times so he was comfortable with this process.

Having a plan gave us the best opportunity for success.

Clearly with this severity of injury the player could have failed at any of the rehab stages discussed above.

We were able to progressively load him during the week, progressing through each step of the rehab plan, moving him closer and closer to the end goal and his return to sport and the Grand Final.

The plan was nailed very early after the injury had occurred and was key because it allowed complete clarity for both the player and me (the therapist), so we both knew the process.

It allowed greater ‘buy in’ as the player understood how each step of the treatment process linked together and allowed the player to have input on his end stage rehab.

Whilst this is an extreme case, we didn’t do anything fancy.

In fact, the plan was super simple.

It was the same plan I use with EVERY patient I see.

He followed my 6 Step Rehab Plan, which is the same process I use for any patient or athlete I work with, regardless of their injury.

I know there are 6 key stages to allow return from injury and back to full activity.

The 6 Step Rehab Planner gives me the clarity I need to know what each and every step is, whilst allowing flexibility to fit this rehab plan to the specific athlete or patient I am working with, relating it directly to their end goal, in this case, getting the player back playing 7 days after posteriorly dislocating his shoulder.

Your Plan Should Be Nailed At The Very Start Of The Treatment Process, So Both You & Your Patient/Athlete Understand The Steps They Need To Take To Get Them Back To Full Fitness

You Do NOT Need A Different Treatment Approach For Every Different Injury That You See, Just A System To Allow Progression Through A Full Treatment Plan, So You Know When They Are Ready To Return To Full Activity

PS. If you want to learn more about the specific steps I used in this case and the New Grad Physio Rehab Planner which I use for each and every patient that I see, then just reach out to me at andy@newgradphysio.com and Ill get right back to you.