Overuse injuries like Achilles or patella tendinopathies can be often to manage.

Patients and athletes have often had these problems for long periods, have tried and failed rehab previously and some have even been told they ‘may have to live with their problem.’
But it doesn’t have to be like that.

Just this morning I received an email from a patient that I had seen previously in my private practice, an American Football Player who had been suffering with an Achilles problem

At his worst point, he had stopped all activity; American Football, training, the gym and was even having problems with his ADL’s.

It was great to hear he was doing well, that he was back in full training and getting ready for the new season, with no issues.

He had had some less than successful outcomes from previous rehab with several other therapists, for a few different reasons.

None of these reasons related to the rehab.

It wasn’t because the rehab wasn’t good, it was completely the opposite.

His rehab programmes had been very detailed, they were evidenced based and the patient adhered to the programme fully.

But they all missed a few important things…

In this blog I will discuss what these missing things were that were preventing a full and successful return to full fitness for this patient.

You will discover how to best manage patients with overuse injuries like Achilles and patella tendinopathies, so you can get the best results with even more difficult cases.

Quite simply, we often make things more complicated than we need to do when it comes to injury management.

We need to focus on what is happening…

With an overuse injury, simply some tissues are doing too much, whilst other tissues are not doing enough.

That is why some tissues become painful and sensitive. 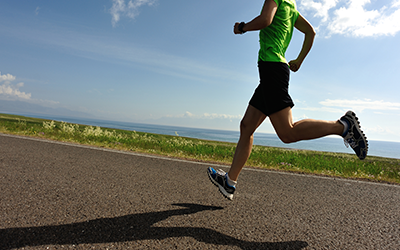 Once we think this is happening then we need to test this hypothesis.

We need to test this to see if it is true.

How To Test What Is Working?

As therapists this is easy as we can use our objective testing to identify what tissues are working and which tissues are not working hard enough to confirm (or deny) your working hypothesis.

With overuse injuries they whilst almost always relate directly to the patients past medical history and injuries they have sustained in the past.

My American football player had left sided pain (Achilles tendinopathy) but he was overloading his left lower limb because of a problem with his right knee, a previous injury he had sustained almost 10 years before.

In short, he had never restored full knee ROM, movement control and the muscles around the knee were not working efficiency.

They were causing a shift away from this side of his body (away from his knee) causing him to more load on to his left side (the side of his Achilles symptoms).

So, whilst he had left Achilles pain (pain in his left lower limb), his actual problem was all to do with his right side and his right knee.

Show The Patient What Is Happening…

Its all well and good giving out fancy rehab for ‘other problems,’ like my patients’ old knee injury, but if the patient does not understand why they are doing this rehab…

They will NOT do it.

You need to clearly be able to show to a patient that whilst they might have pain somewhere i.e. in their knee or ankle, this may not be their main problem.

This makes sense to us…

But it is a big mind-shift for patients.

They may have walked in your clinic with knee pain and then 10 min later you are telling them they have an ankle or hip problem and that it relates to some injury that they had years and years ago.

An injury that hasn’t bothered them in all that time.

If we explain this well it allows us to really focus on the actual problems.

We can tailor the rehab to focus on both the site of injury and the source of injury and as a result get faster results, and results that stick, with our patients.

Failure to do this might just lead to more patient confusion, a lack of patient understanding and as a result…

Plus, if you are only focusing on the site and NOT the source of symptoms is it any wonder that some ‘overuse injuries’ become very difficult to manage and you and your patient get frustrated with the lack of progress in symptoms and return to activity.

Simplify Overuse Injuries – In overuse injuries, something is overworking and something else is underworking.

Test What Is Overworking & Underworking – Use your objective testing to test your hypothesis, linking back to your patients PMH

Ensure Patients Understand – It may be a big shift in patient mindset, but they need to understand and acknowledgement the importance of both the site and the source of their problem.

Don’t forget you can catch all my previous episodes at www.newgradphysio.com/podcast or subscribe to ‘The New Grad Physio Podcast’ on your preferred podcast platform.

And if you enjoyed this content you will also enjoy reading my book ‘The New Grad Physio,’ You can find more about the book and learn how to get a copy at www.newgradphysio.com/book