Vertebral Artery Testing – How To Rule Out This Sinister Pathology

A vertebral artery problem is a medical emergency!

This problem is linked directly to strokes, heart attacks and even death.

…and have the skills to know how to test for this problem are very important.

These injuries are rare.

You are not going to see many of these cases.

I personally have never seen a patient or athlete with a confirmed vertebral artery dysfunction but I have tested to make sure of this several times.

I do however, know other several other therapists that have picked up these problems in their own clinics and sports clubs, thankfully at the right time so their patients could get the right help and treatment they needed.

One such story sticks out.

A therapist that I know very well through my work in rugby once had a player that had sustained a concussion (nothing new in rugby!).

However, his symptoms seemed quite erratic and the therapist just wasn’t happy.

Whilst recovery from concussion is rarely linear and can often follow an unpredictable path, the therapist just wasn’t happy with how he was progressing.

He had some advanced concussion tests done and even saw a neurosurgeon but nothing untoward was found.

Prior to these tests and consultations the therapist had taken a thorough past medical history.

Whilst this had been done during his medical when he first signed at the club he did it again, unhappy with how his concussion recovery was progressing, suspecting something wasn’t quite right.

Like in his medical the player denied any previous head or neck trauma.

He was an overseas player, from Australia, and it took the therapist to make contact with the players previous clubs to make sense of what was going on.

What he found out next was crazy…

He had fully ruptured the artery itself on one side of his neck!

This injury nearly killed him but due to the great work by the medical team at the game and the care he got at the hospital he was ok and avoided possibly a very serious outcome.

How the player had managed to forget this injury I do not know.

Having worked in rugby for 10 plus years I have seen and heard some crazy medical stories and this is defiantly one of them!

This discovery then made sense as to why the player had been slow to respond to his concussion and why his symptoms had been so erratic.

When he had some additional vascular tests his overall blood supply to his brain wasn’t a good as you or me, given his previous vertebral artery injury and repair, which made sense as to why recovery from his concussion was taking longer than expected.

This is an extreme example I know and you might never see an injury as severe as this (I hope you don’t)!

But, would you know what to look out for and how to test for a VAD?

This blog will highlight all the main information you need to know and how to test a patient with a possible VAD.

What Is The Vertebral Artery & What Does It Do?

The vertebral artery is a major artery in the neck.

The artery itself branches from the subclavian artery, passing though the foramina of the transverse processes of the sixth cervical vertebrae, upwards behind the atlas (C1), before it enters the cranium where it joins with the opposite vertebral artery to form the basilar artery.

What Symptoms To Look Out For

You might suspect a VAD if your patient gave positive answers to some of your cervical spine RED FLAGS questions.

Specifically, the 5 D and 3 N questions.

These symptoms are specific questions for VAD.

However many similar symptoms can be present with other head and neck injuries.

It’s not uncommon for people with neck pain to suffer from episodes of dizziness, nausea or numbness or an athlete with a concussion to have problems with their vision and speech.

A direct blow to the neck or throat, like in rugby, could cause a problem with speech or even swallowing.

So it is important that you screen all the above and ask ALL the above questions for all patients presenting with neck pain. 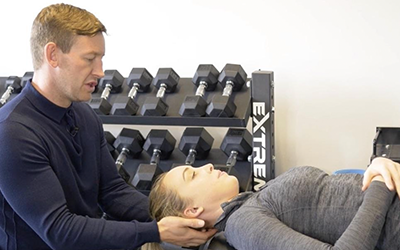 Whilst not having any of the above listed symptoms will not 100% rule out VAD, you would be confident that the absence of any symptoms that their issue is likely not VAD and infact, something else.

To conduct the test…

Perform passive rotation of the neck to the same side and hold for approximately 30 seconds.

Repeat this test with head movement to the opposite side.

The test is considered positive if there is dropping of the arms, loss of balance (unlikely if laid supine), or pronation of the hands or any reproduction of the symptoms listed in the previous section.

A positive result indicates there is a decreased blood supply to the brain.

The tests themselves are provocative and therefore hold some inherent risk.

However, if appropriately selected and performed with care (including only to the initial point of provocation of symptoms), any potential risk to the patient will be minimised.

So only test if you suspect possible VAD, based on your subjective assessment and red flag questions.

And if you pick a VAD up, get them out of your clinic and straight to A&E.

What Is The Vertebral Artery & What Does It Do? The vertebral artery is the main artery connecting blood supply from the vertebrae to the brain

What Symptoms To Look Out For:A good job with your subjective history and special questions will help you screen for possible VAD > 5 D’s & 3 N’s.

Vertebral Artery Test: To test for VAD, perform a 30 sec hold with your patient supine on the bed with their neck in a position of passive extension, side-flexion & rotation, noting this tests the opposite side.

PS. Do you want to touch up on your cervical spine assessments?

Do you want to learn more about how to make sure you don’t miss sinister injuries like VAD and other potentially serious neck injuries?

Email me at andy@newgradphysio.com with the subject ‘Neck Diagnosis’ and I’ll get right back to you and help you out.