Why A ‘Simple’ Ankle Injury Might Not Be All That Simple…

Lateral ankle injuries are highly prevalent and account for a high number of injuries and we see in our clinics.

In most cases, patients and athletes can return to full activity with no problems and often quite quickly.

However, many of these patients and athletes develop problems in the future and this is not just limited to future injuries at the ankle.

As a New Grad Physio, I made the mistake many times of thinking that since a patient or athlete had returned to full activity or sport that their rehab was complete.

It was only after watching these same athletes and patients have ongoing ankle issues or start to develop other issues following an ankle injury, that I started to question what I was missing.

I have learnt the importance of how even a low-level lateral ankle injury can lead to chronic ankle problems and not only that, but also predispose further injury to other areas of the body.

This was never more evident than last week in my private clinic, where I had an active 30-something year old patient, who had injured his lateral ankle (inversion injury) after falling off an indoor climbing wall.

He was able to continue his climbing session, but reported symptoms worsened later that day, his ankle became highly swollen, his pain level increased sharply and that he struggled walking for the next few days.

He self-managed his symptoms well, iced and compressed the area and was able to modify his activity over the first few days of injury.

By day 4 he was walking pain-free and felt symptoms were improving daily.

Fast forward 13 weeks, he was sat in front of me in my clinic.

At this point he still wasn’t back to full activity (climbing/running) despite the ankle being ‘pain-free’ in everyday activities.

He was still getting some pain when in a prolonged plantar-flexed and inverted position (sat on heels in yoga was something he reported he couldn’t tolerate) and he still hadn’t attempted climbing or running for fear of re-injury.

On assessment he was lacking range of movement on his injured ankle, he had reduced output locally at his ankle and his hip on the same, all problems we were able to restore within the early part of his initial assessment session.

The remainder of the session was spent getting him confident with taking load through his ankle using a series of lunge and low-level hopping drills. 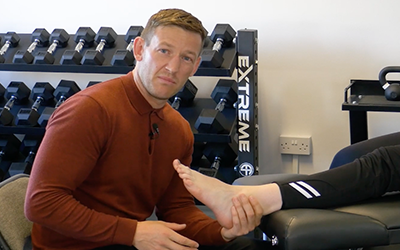 This patient and how he presented, highlighted a few common errors I see New Grad Physio’s make all the time when managing lateral ankle injuries.

Firstly, a big assumption is made that when acute symptoms diminish, patients and athletes can accelerate back into higher level activity, even sport, very quickly.

We see this commonly in a sports setting, where-by a moderate, even high-level lateral ankle injury, can be back playing very quickly.

This can be very different to other ankle injuries like an ankle syndesmosis injury, where the prognosis and return to activity or sport, might not be quite so quick.

I’ve had athletes with high level lateral injuries, back playing the next week, strapped up and being able to get through games with no issues (or so I thought).

In these cases, athletes had progressed through a graded rehab plan, they have tolerated the loading progressions, albeit in a short space of time.

There is an emerging evidence base linking even low-level ankle injuries with future ankle pathologies, particularly osteochondral injury.

This makes complete sense, considering the increased laxity in the ankle following a lateral ankle injury due to the loss of passive restraint to structures like the ATFL and CFL.

Add to this if a patient or athlete still lacks ankle range of movement following their injury, this can cause increased ‘load’ at specific areas of the ankle joint as the ankle is unable to dissipate this load through range.

This repetitive ‘load’ has been linked to not only joint surface chondral injury but also an increased prevalence of bony spurring within the ankle, commonly seen within the anterior joint line.

Another big problem that I see with some of the more complex cases I have consulted with, in both private practice and sports settings, is how previously incomplete ankle rehab has caused other overuse injuries elsewhere in the lower limb and sometimes even back pain.

If the ankle never fully restores its ability to move fully or produce force then for an athlete or patient to continue to function at higher level loads and activities, some other structure(s) must take up the slack and over work.

Just last year I treated a professional footballer that had not played in over 12 months due to symptoms of athletic groin pain.

He had seen various other therapists, had extensive imaging and subsequent injection therapy and whilst his ‘athletic groin’ pain rehab was very good, none of it addressed his real issue, a low-level ankle injury (deltoid) that he had picked up 2 years prior.

The injury itself had only kept him out for a couple of weeks and it didn’t give him any trouble, but…

…He lacked range of movement in this ankle (80% of unaffected side) and he lacked the ability to load well through his ankle and foot.

As a result, his body had to find a way around this and it did this by working harder through his anterior hip, specifically his long adductors, distal obliques and rectus femoris.

This is just one example of how a ‘simple’ ankle injury can cause BIG problems if not managed well.

So, as I, and as you, see such a high prevalence of ankle injuries in our practice in the NHS, private practice and sport always ask yourself the question…

Is this ‘simple’ ankle injury as simple as it looks?

Acute symptoms with lateral ankle injuries can lead to quick loss of function and high levels of pain due to high inflammatory status when compared with other ankle injuries e.g. ankle syndesmosis

The ankle is a key component to lower limb function, so issues not addressed or incomplete rehab can likely result in other lower limb injuries on both the same and opposite sides of the body

PS. If you want to learn how to accelerate your skills and your career as a New Grad you need to look at my latest and most popular FREE resource ‘5 Steps To Fast-Track Your Career As A New Grad Physio.’ Download it for FREE right here